The Curious Case of Coronavirus Fatalities

Nations across the world have been scrambling to enforce different mitigation strategies against the spread of the highly contagious coronavirus (COVID-19), ever since it was declared a pandemic by the World Health Organization (WHO) on March 11th – three months ago.

As the global death toll continuously increases, overtaking the 450,000 mark, we are constantly being bombarded with various COVID-19 charts, prominent examples being the New York Times’ coronavirus map of the United States as well as the Guardian’s map of the global spread of the virus.

The overwhelming amount of coronavirus related information available begs the question: “What are coronavirus charts really telling us?” This blog post will cover a few common issues pertaining to COVID-19 data, particularly pitfalls of looking at just the fatality numbers of different countries, introduce a new perspective where case fatality is charted instead, and discuss limitations when it comes to interpreting data.

The biggest downside of comparing COVID deaths across the world is that death toll figures do not take into account population size or the total number of confirmed cases a country has.

For example, take the table below, which includes 16 countries spanning the different continents of the world. At first glance, it is evident that countries like the United States and the United Kingdom have suffered much at the hands of the virus, with recorded deaths of 109,799 and 40,548, respectively. Both these figures are much higher than the death toll reported in China (4,638), where the first cases were recorded.

In comparison, countries like Belgium with 9,675 fatalities deceptively appear to remain relatively unscathed by the virus. The fatality figures, by themselves, do not take into account the fact that for a country of only 11.4 million people, the fatalities per capita (deaths/population size) for Belgium becomes close to 0.085% compared to the United States’ fatalities per capita of 0.036% (117,714 ÷ 326.7 million).

Moreover, the estimated deaths also place Germany right below Belgium, but in terms of the severity of the pandemic, Germany remains relatively unscathed in comparison to its fellow European nations, as we will see in later sections. 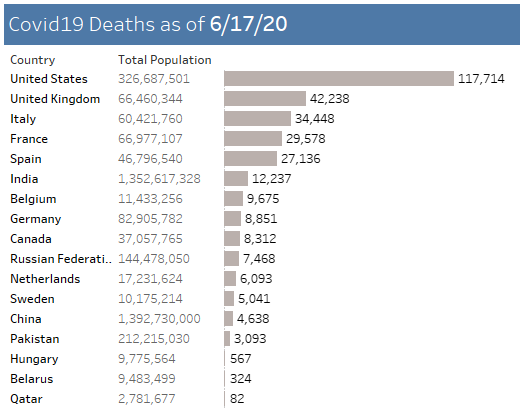 Perhaps a better measure of analyzing the impact of the virus on different nations is assessing their case fatality rates (CFRs). The case fatality rate provides a clearer picture of mortality as it informs us of the fraction of the population that dies from the virus after acquiring it. However, it is important to note that asymptomatic COVID carriers who have not been tested for the virus would not be included in the total number of confirmed cases.

Moreover, the United States, which currently has the highest number of recorded cases in the world, as well as the most significant number of deaths related to COVID, also has a significantly lower rate of 5.4% compared to Europe.

The lack of colour in Russia’s region, with a case fatality rate of only 1.4%, also catches the eye. Why are global case fatality rates so drastically different? How is it that countries with poorer healthcare systems seem to be relatively unscathed by the virus? What is Western Europe doing that is causing such high fatality rates? These are questions with a variety of widely different answers with the most important factors, determining the case fatality rate being: 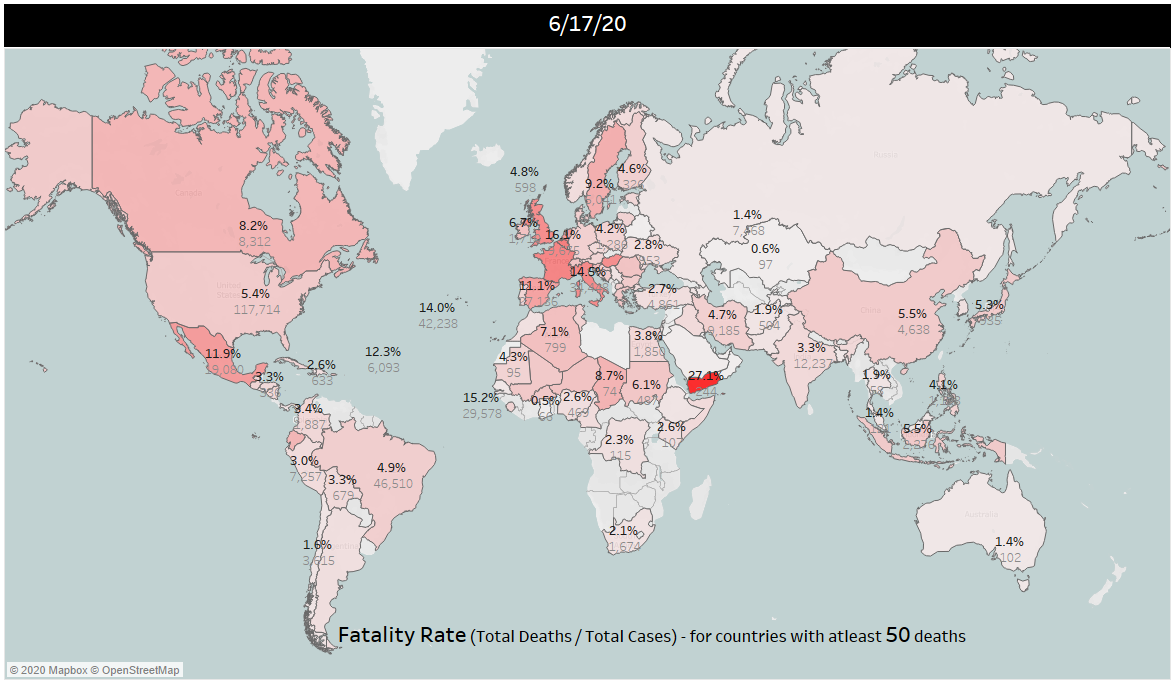 The Median Age of the Population

It is widely accepted that the coronavirus has a much deadlier impact on the elderly as their immune systems are often compromised. Take the small Italian town of Nembro, for example. With a population of just 11,000, it suffered from 152 deaths in March.

With regards to the deaths in Nembro Luca Foresti, a researcher, stated:

“Almost all the old people got it. And therefore they died, a lot.”

The susceptibility of older populations to the virus would explain why certain countries such as Italy, France, Belgium, the Netherlands, Spain, and Sweden have much higher case fatality rates than others. These countries comprise of average populations that range between 40 – 47 years. The positioning chart below plots the case fatality rates of different countries, taking into account their median age. 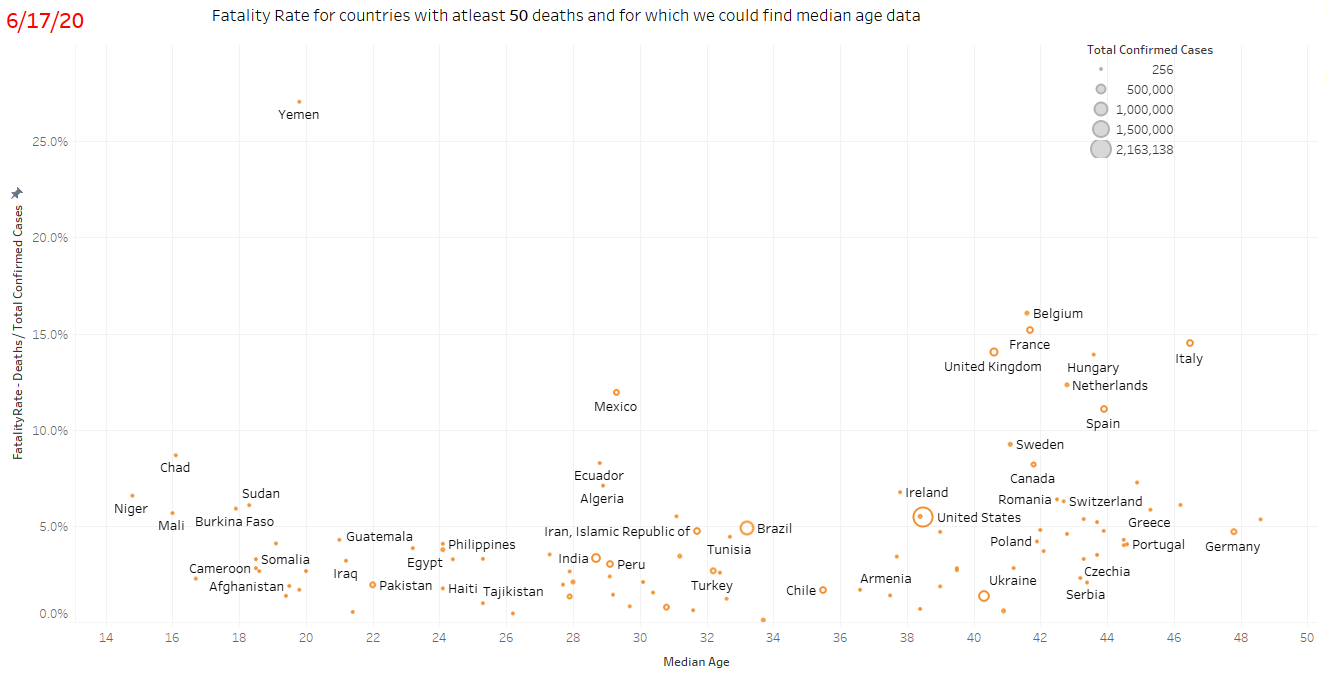 It is worth noting that there exist many anomalies in the chart above. Countries like Japan and Germany, both of whom have a high median age of between 47 and 48, have a significantly lower rate than other countries with similar median ages, such as Italy. The table below displays the case fatality rates of 16 countries spanning different continents. Most outliers in the previous chart are included in the table below, as well as nations that fall somewhere in the middle, such as China and the United States.

Another explanation for the differences in fatality rates is the extent of COVID testing conducted by the country. Testing influences the mortality rate in two ways: a) countries that carried out widespread testing early on were able to contain the outbreak more easily (thereby reducing the spread and limiting deaths) b) a lack of testing can lead to a severe underestimation of both cases and related deaths.

An example of the first scenario is found in countries like Germany and New Zealand that deployed large scale testing quite early into the crises. The results of these efforts could be seen when on 8th June, New Zealand declared itself COVID free. The country recorded 1,507 confirmed cases and 22 coronavirus deaths since the arrival of the virus in late February, leaving it with a case fatality rate of 1.5%.

“Elimination is not a point in time; it is a sustained effort.”

Moreover, widespread testing efforts not only help mitigate the spread of the virus, but they also result in asymptomatic individuals being included in the total number of confirmed cases. This substantially increases the number of total confirmed cases, which in turn leads to a lower case fatality rate (an example of which is Germany).

These aforementioned countries are part of the developing world and have some of the lowest GDP per capita in the world. Of the 189 countries ranked on worldometers.info for GDP (PPP) per capita (2017), Mali ranks 164th, Chad ranks 168th, Burkina Faso ranks 171st and Niger ranks 181st. It is quite probable that these resource-constrained countries (including Yemen) are not carrying out enough testing and hence their case fatality rate appears high. 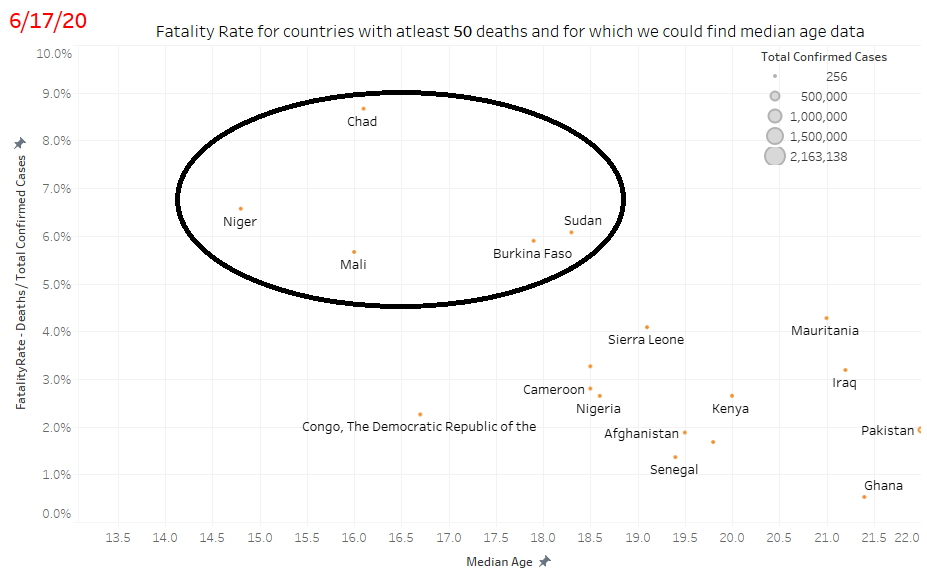 Who is included in COVID deaths, and who is excluded?

Perhaps the most critical determinant of fatality rates and case fatality rates is the criteria used to identify coronavirus related deaths. Different nations are adopting widely different approaches with regard to this matter.

Under normal circumstances, countries such as the United States depend upon paramedics to pronounce a person dead and transport them to a hospital where doctors would then certify the death and issue a cause. In a pandemic, these procedures are mostly inconsistent. Doctors are struggling to certify deaths, and medical examiners are called upon to store bodies until the pandemic abates, with little post-mortem testing taking place.

What this means is that patients who pass away in hospitals who had already tested positive for the virus are the ones that are being counted in the COVID death toll. Thus, the estimated COVID deaths are understated as some people may die of the infection without getting diagnosed. These people might die at home or a nursing home, and thus not get included in the official tally. They might never be tested, or their death might be attributed to another cause. This might also explain why Germany has such a low case fatality rate despite an aging population, as Germany only counts deaths that have a positive virus test.

“A virus presents a unique set of circumstances for a cause of death, especially if the target is the elderly, because of the presence of comorbidities”

Thus, elderly patients with COVID might die of a heart attack, and their death would not get recorded as a coronavirus related fatality.

The reason some countries have a significantly higher fatality rate is due to a concept called “excess mortality,” the number of extra fatalities above typical trends. The main driver for excess mortality is the approach used to categorize COVID deaths. While some countries are only reporting deaths of patients that tested positive (like the United States and Germany), many European countries such as France, Spain, and Belgium are also reporting deaths at nursing homes as COVID related even if there wasn’t a confirmed infection.

The impact of the disease on residents of nursing homes is severe yet the cause of death remains undiagnosed. Belgium has one of the highest case fatality rate in the world (16.1%). A reason for this is that Belgium registers deaths that occur in nursing homes as coronavirus related based on the symptoms shown and who the people have been in contact with. Their goal is to get a clearer picture of the virus's hot spots.

However, this approach also results in an increase in the case fatality rate. France, for instance, reported the number of deaths that occurred in some nursing homes for the first time in early April. The figure reported was almost double that of which had been reported under hospital deaths. This would be another possible explanation for the 15.2% case fatality rate of France.

Finally, the health care practices countries adopt, along with the capacity of their health facilities, dramatically influences their COVID mortality figures.

Between 20 and 30 percent of COVID-19 patients who are hospitalized require intensive care. Amongst this percentage, 47 to 71 percent also require artificial lung ventilation to help their bodies get enough oxygen. Thus, ventilators become essential for coronavirus patients.

Unfortunately, most nations of the world face an extreme shortage of ventilators during the ongoing pandemic. According to the New York Times, there are about 170,000 ventilators in the US; however, the American Hospital Association estimates that 960,000 patients will require them over the course of the pandemic. 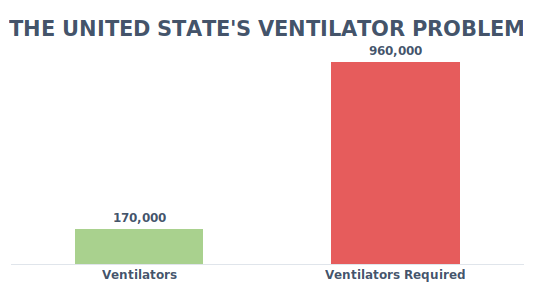 Nations like Italy also faced a severe shortage of ventilators, which resulted in an extremely overburdened healthcare system.

Moreover, Yemen (with a massive case fatality rate of 27.1%), stands out as the country most impacted by the virus. This comes as no surprise given the fact that the nation has been embroiled in the Houthi Crisis since 2014. According to UNICEF, Yemen is currently facing an emergency within an emergency. In the light of its ongoing conflict, the citizens of Yemen, do not have access to sanitation or even clean water, exacerbating many diseases. Its healthcare system is severely damaged with only half of its health facilities functioning. Those that are running, lack the equipment to treat coronavirus patients, as well as basic equipment like gloves or masks.

Given the highly contagious nature of the virus, and the need for a significant portion of patients to be taken under intensive care, the lack of such facilities only results in an overburdened healthcare system struggling to provide for its citizens.

In light of the drastic differences in COVID statistics, a more standardized approach towards testing and reporting cases would be ideal. However, as the world strives to find a balance between saving lives (lockdowns) and livelihoods (economic growth), while simultaneously scrambling to develop a vaccine, it is likely that standard setting may not rank high on the priority list. Hence, we need to take any covid-19 data with a grain of salt.